Besides making sure that you’re regularly taking the time to clean your pool and carry out weekly maintenance checks, by far one of the most important aspects to keeping your pool in tip-top shape is to ensure that you are keeping it properly sanitized!

If you’re currently considering swapping out chlorine products or you’ve recently installed a pool in your home and you’re researching the best chlorine product options on the market – then you might have come across two tried and true favorites: Trichloro-S-Triazinetrione and Calcium Hypochlorite. 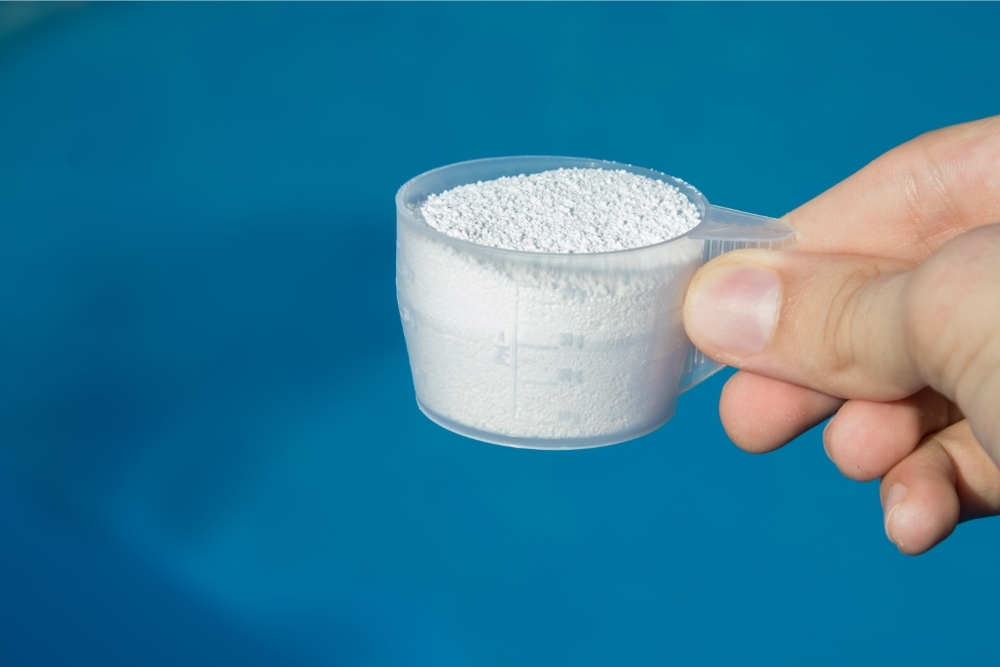 Otherwise referred to as Trichlor and Cal-Hypo, these two types of chlorine pool products will be able to ensure that your pool water is kept safe and clean to swim in, and will greatly lower the chances of illness and other issues that can be caused by contaminants, while also ensuring that you are able to enjoy yourself in the water.

To help you decide which one might be the best option for you, this article is going to be talking you through the two types of chlorine product, so that you can then decide which one is best for you and your needs. So, whenever you’re ready – let’s begin.

Otherwise known as Trichlor, Tricholoro-S-Triazinetrione is a type of “dry solid” that contains (at the time of writing) the highest available chlorine content of any other type of chlorine product that is currently available to buy on the market, besides chlorine in a gas form.

More often than not, Trichlor products often tend to come in a dissolvable tablet form, and will usually contain a mixture of both cyanuric acid and chlorine.

The reason that it contains the addition of cyanuric acid is due to the fact that it is able to help stabilize the high levels of chlorine, which means that you won’t have to worry about the effectiveness of the chlorine being reduced due to bacteria, sunlight and other factors.

As you might have already guessed, Trichlor is commonly used as a way to kill germs and bacteria in hot tubs, pools, and other recreational bodies of water.

As soon as this has occurred, it then means that the contaminants will be unable to infect the body of water (or anyone in it) as their effectiveness will be nearly at zero due to Trichlor being able to break down the cell walls, which will then cause them to die.

Alongside rendering them useless, it will also then mean that the targeted contaminants will be unable to multiply and become out of control.

It is important to note that, though other types of chlorine will act in the exact same way, seeing as though Trichlor is made to contain one of the highest concentrations of chlorine on the market, it means that Trichlor will be the most effective and fast-acting disinfectant of all chlorine pool products.

What is Calcium Hypochlorite?

More often than not, Calcium Hypochlorite is essentially good old-fashioned chlorine (Ca(OCI)2). It is usually sold as a white compound that is typically crushed together to form a tablet which can then be dropped into the pool without the requirement of any measuring.

When used correctly, Calcium Hypochlorite has the ability to be able to effectively destroy all types of potentially dangerous contaminants (such as germs) in order to sanitize the water and make sure that it is completely safe to swim in.

It can also help to prevent something known as “swimmer’s ear” which is something that occurs when germs get into the ear canal from swimming, which can cause a pretty nasty earache and require medical attention.

Due to its moderate levels of chlorine, Calcium Hypochlorite is by far one of the most common types of chlorine products used in public swimming pools, spas, waterparks, and more, and are also used in large water systems that supply water to homes across the USA and Canada.

Besides all of that, it is also worth noting that Calcium Hypochlorite comes with an exceptionally long storage life, which means that it offers excellent value for money.